Human Rights Friendly Community-2021: from Field Studies to Implementation of the Recommendations 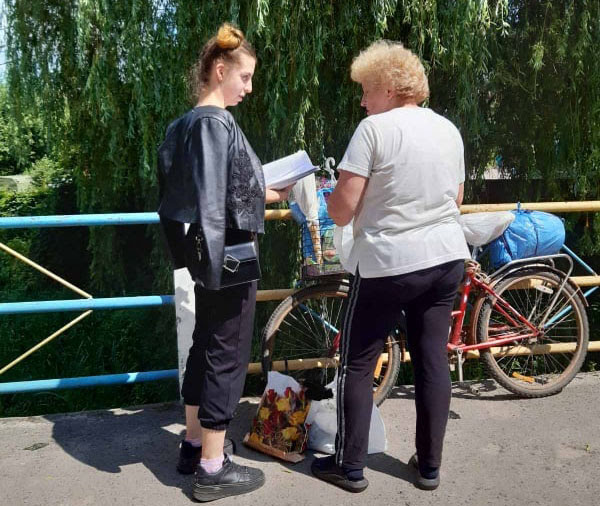 In July and August,2021, the initiative groups conducted the field stages of their legal needs surveys in five regions of Ukraine. These data will be a basis of the Road Maps for Creating the Sustainable and Efficient Eco-System for Access to Justice in the Communities.

The studies were conducted within the Human Rights Friendly Community Program, which the Legal Development Network administers. The group coordinators have shared their preliminary opinions on the data obtained. This information was unexpected for some of them.

Photo: Study of the legal needs of the residents of the Kamianka-Buzka Community (Lviv Region). Photo by Andrii Korbetskyi.

Andrii Korbetskyi, the Coordinator of the Initiative Group of the Kamianka-Buzka Community, Lviv Region,

“We have surveyed 245 respondents, including 43% of men and 57% of women. Women were somewhat more open than men, but there was a general tendency: they were not really eager to answer personal questions. We often had to explain who we were and why the survey was conducted to collect information. The respondents were most concerned about the legal issues associated with the subsidies and other social payments, medical services, inheritance, and land issues. In general, we see that the legal issues and needs inside the community are quite broad, so we are planning to develop the legal service improvement program based on the study and hope that the local authorities will support it at the beginning of 2022.”

Olha Radionova, the Coordinator of the Initiative Group of the Kakhovka Community of the Kherson Region,

“We have surveyed 400 respondents, including 150 male and female residents of the rural area and 250 city residents. We chose the quote in each sample to consider the opinion of men and women and age groups to the maximum extent. Owing to this, the margin error in the study findings is up to 5%.

The surprising thing was that the surveyed had low demand for advice of lawyers and onsite consultations. They don’t believe that location of a legal aid center in another settlement was a barrier. We expected the answers to be different because the community had been increased: five villages had joined. Instead, we identified the need for more printed information materials. We also identified the bullying issue in one of the best schools in the community ,which we had not known before. We found out that the people were reluctant to answer our questions and refused to participate. I would even say they were afraid, although all the volunteers explained the purpose of the survey and their function in a very detailed manner.

The women were more eager to answer the questions while the men and the people older than 80 were not. The respondents aged 20 to 45 told us about legal issues in more detail.

The studied people helped us discover the ‘sore spots’ of the community and gave a clear understanding of the necessary tools.”

Mykhailo Korobetskyi, the Coordinator of the Initiative Group of the Vilkhivka Community, Kharkiv Region,

“We have surveyed 238 respondents, including 61% of women and 38% of men. During the study, some of the respondents refused to share their experience as to legal issues with us: they either didn’t answer some questions or just left. We also faced a lack of trust in the volunteers.

The respondents are most concerned about such legal issues as social allowances and benefits, housing and relations with their neighbors. Forty faced the legal issue, 65% of them tried to resolve it, and only 37% managed to fully or partly resolve it.

The study helped identify the demand of the locals for the police office in the community – there are only district police officers now. Also, most of the surveyed referred to the need for lawyers, mobile groups of free legal aid, and overall free legal aid.

The study helped us find several legal needs of the community residents, but it is only one of the stages of the work, with a considerable part of it still ahead.”

Mariia Kirianova, the Coordinator of the Initiative Group of the Poltava Community,

“Out of 2,500 surveyed people who agreed to participate in the study, almost a third of them, 700 persons, had had legal issues for the last two years. Women had more of them, 56.6%, and 43.4% were men. Most of the male and female respondents were married and had higher education. The people were mostly concerned about such legal needs as housing and utilities, subsidies, social security and benefits. The minor worrying issues were establishing legally significant facts and criminal offenses.

The women mostly had had legal aid in connection with family relations, relations with their neighbors, heritage, division of property, etc. Some of the respondents noted that they wanted to obtain free legal aid in the future because they could not resolve their legal issues themselves. At the same time, 66.4% of the surveyed managed to resolve all the legal issues, which is highly positive.

The people rarely refused to fill in the questionnaire, but it still happened. The main reason was the shortage of time because the survey took 10 to 15 minutes. Many people, especially those who had faced legal challenges identified in the study for the first time, were inspired by the fact that their experience would help improve the provision of legal services in the community.

The study helped us identify the needs of the locals. We will work with them more in the future.”

Yuliia Dmytrash, the Coordinator of the Initiative Group of the Balakleia Community,

“The residents of our community are most concerned about the legal issues connected with the land relations, social allowances and benefits, housing and utilities. We have surveyed 371 persons, including 51.8% women and 48.2% men. The women were more open while the man mostly answered, ‘everything is fine, nothing worries me.’

Some people refused to participate in the study, mainly because they were short of time. Almost all the people we contacted agreed. The preliminary meeting with the mayor was of great help because some of the community residents already knew that we would be conducting the study and its purpose.

The study was of great use. When the people faced a legal challenge, we found out that they contacted lawyers in Smila and Cherkasy, which are somewhat far from the community, rather than trying to obtain free legal aid. They also reached the local authorities, which could not duly assist them. 56% of the surveyed tried to resolve their legal issue, 36% had no access to information and professional aid. At the same time, their needs and problems are standard. Therefore, if there was a clear action algorithm, they would be able to resolve their issues on their own.

We were surprised to find out that almost all the surveyed respondents used the Internet, even the elders. In general, this information will help us reconsider the strategy for providing legal services in the community because we have been considering more onsite visits. We now understand that alternative consulting methods, such as online, explanations on the community website, in social media, etc., would be much more efficient.”

Vitalii Okhrimenko, the Programme Manager of the Legal Development Network, on how the study will be used in the future,

“At each stage, each initiative group will use their study data to develop strategic solutions that can resolve the identified legal issues and simplify access to justice in the studied communities. These strategic solutions will be a part of the Road Maps on implementation of the recommendations following the study, which will facilitate the establishment of sustainable and efficient eco-systems of access to justice in each target community in two or three years.”

The training and practical Human Rights Friendly Community Programme has been implemented by the UA2J School of Practice since 2019 based on the network of legal clubs #PRAVOKATOR, with the support of Coordination Centre for Legal Aid Provision, International Renaissance Foundation, Ukrainian Legal Aid Foundation, partner organisations and institutions, and is administered by the Legal Development Network.

Written by: Halyna Kolesnyk, the Communications Manager of the Legal Development Network