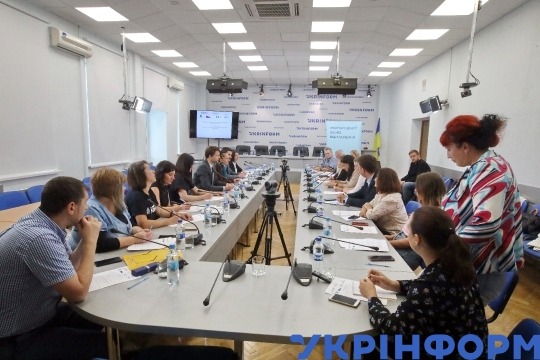 On 15 July 2019, Ukrinform held the public discussion Trends in the Communities: Community Advisers’ Experience, where the experience of the community advisers in the implementation of the social initiatives in the communities was presented.

The challenges faced by the community advisers, partnership support from the non-government organisations, ways of cooperation with the government and non-government legal aid providers were discussed.

Olha Halchenko, the Coordinator of the Human Rights and Justice Programme of the International Renaissance Foundation, told that the community advisers worked all over Ukraine to render legal aid to the residents in their local community regarding the most common issues. There would be 150 community advisers in the country by the end of 2019.

She also emphasised that the leading experts from different industries developed the educational programme for the community advisers.

“ The training is made of three modules that last three months. Every month, three or four days are dedicated to resident training, and there is also the system of home tasks between the modules. In general, it takes three months to get a certificate. The training is free, but you must pass the competition, the selection to get there. There are questionnaires to be filled in. Before each regional training, the competition committee gathers and selects a certain number of the candidates who are given an opportunity to be trained”

Oleksandr Baranov, the Deputy Director of the Coordination Centre for Legal Aid Providing, described the possibility of forwarding the requests submitted to the community advisers to the representatives of the free legal aid system or other legal aid providers. In this case, the client is directly rendered legal aid in the centre or agency of the FLA system.

“ If we do wish to adequately respond to the existing challenges of the high-quality legal aid and protection of people, solutions and answers must be found in improvement of the people’s ability to resolve their legal issues. The community advisers must be such agents of changes who can arm people with the knowledge of the law and practical skills. To our mind, this is the core of the concept of the community advisers ”

– Yevhen Poltenko, the Executive Director of the Legal Development Network

Initiatives implemented by the community advisers:

1The social initiatives of the community advisers are related to the most applicable issues of the local community. In particular, the community advisers from Pervomaisk (Mykolaiv Region), Iryna Ostrovska and Nataliia Klymenko, presented their project “Involving the Youth into Decision-Making”, as a result of which the youth council at the city council was established, and the ideas regarding changes in the residents’ life were developed and submitted.

2Within the initiative “Say No to Conflicts and Yes to Civic Education at School” implemented by Anatolii Levchuk and Mariia Nykytiuk from the Village of Baiv, Volyn Region, the community advisers engaged the pupils into the initiative and organised the space for civic education and rest at school. As a result, they managed to improve the pupils’ awareness of financial literacy, protection of their rights and other important issues.

3Fodor Rudenko from Sloviansk ran the information and awareness raising campaign “Co-Owners Affairs”, which enabled informing and teaching the co-owners in the apartment buildings on how to apply the procedures for caring attitude to their common property.

4Larysa Karpova, the community adviser from Poltava, told about her experience of raising legal awareness in the communities of Reshetylivka, Kobeliaky and Poltava. The initiative was implemented for the purpose of development of the activity who would act as a community adviser in each city and help resolve the most applicable issues of the residents.

5In Pokrovsk, Tetiana Moiseieva-Shylenko implemented the initiative “Community’s Animators”. The purpose was to find active citizens in the villages in the Pokrovsk District, to teach them how to use the tools of influence on the authorities and interaction with the community, and to inspire positive changes and cooperation in their communities. As a result, cooperation of the activities from five villages was established, the competence of the local residents was improved, and the favourable environment for establishment of the sustainable amalgamated territorial community was created.

6The initiatives of Vasyl Borozdin, the community adviser, was implemented in Shostka in connection with the community’s security issues, including the condition of the roads, employment opportunities and the environment. He managed to establish the work group made of the city residents and to develop the priority-action plan to improve the situation.

The event was organised by the Ukrainian Legal Aid Foundation within the grant project “Formation of the Organisation of the Community Advisers” implemented with the support of the American people granted via the U.S. Agency for International Development (USAID) within the New Justice Programme jointly with the community advisers and partners of the organisation: Legal Development Network, Coordination Centre for Legal Aid Providing, and International Renaissance Foundation.